Rode on down to the the locks, just to see what’s happening. Found this sliding into the large lock – 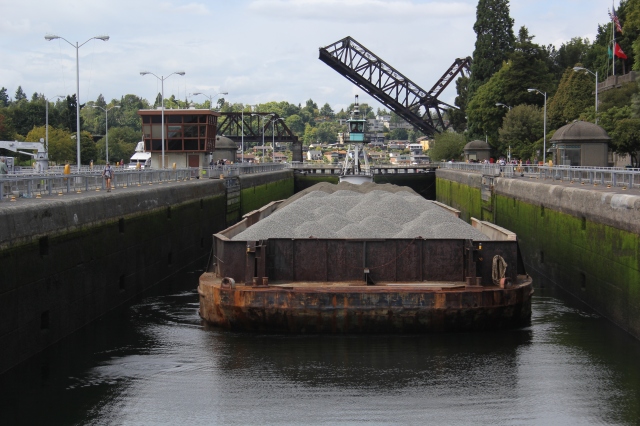 Notice just off the right front corner of the barge (bottom/left of the photo), the ripples in the water? The salmon are pretty active right now. Chinook, I think.

Anyway, so there’s 200 feet of rock and sand. all being expertly maneuvered single-handed, by the Island Chief. She’s a 75 foot, 1800 horsepower, ‘pusher tug’. Boy are these tug Captains good! They filled the lock, opened the lakeside gate, and AWAY she went –

I love that about this town; You can jam down to some-anywhere, and see just about anything. Seriously, when’s the last time you watched a 10-million-pound* barge rise 20 feet, and then get pushed off to it’s lakeside destination? Pretty cool, another awesome Seattle day.

* – I have NO idea what a loaded barge weighs. I think it’s a lot. Probably more than your house. Unless you live in one of those downtown high-rises. Then I think it’s a tie.